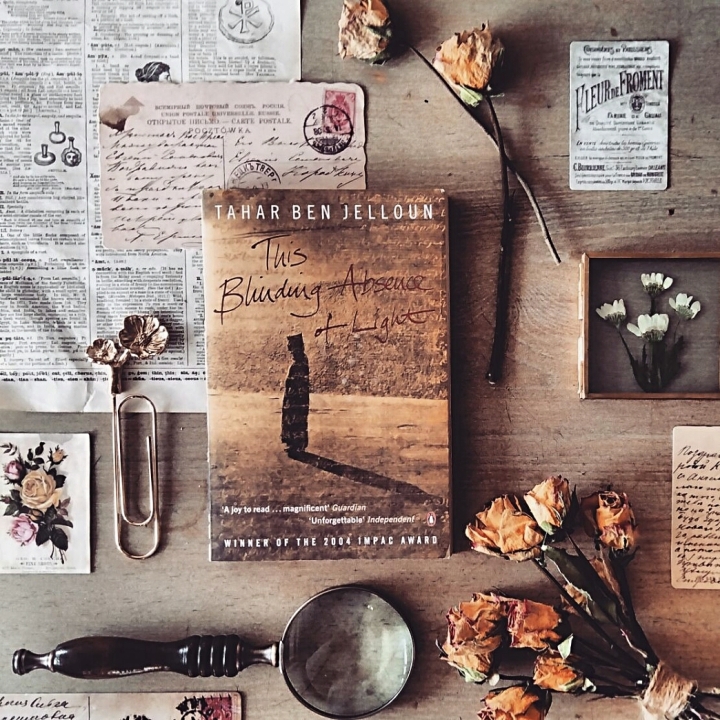 “For a long time I searched for the black stone that cleanses the soul of death. When I say a long time, I think of a bottomless pit, a tunnel dug with my fingers, my teeth, in the stubborn hope of glimpsing, if only for a minute, one infinitely lingering minute, a ray of light, a spark that would imprint itself deep within my eye, that would stay protected in my entrails like a secret. There it would be, lodging in my breast and nourishing my endless nights, there, in the depths of the humid earth, in that tomb smelling of man stripped of his humanity by shovel blows that flay him alive, snatching away his sight, his voice, and his reason.”

‘This Blinding Absence of Light’ by a Moroccan writer, Tahar Ben Jelloun narrates a story of political prisoners who took part in a failed coup against King Hassan II of Morocco in 1971. This story is based on real events and author’s interview with a former prisoner Aziz Binebine.

Following the attempt to oust the King, sixty people were incarcerated for eighteen years in a secret prison called Tazmamart which was located in the Sahara Desert. The conditions in that prison were horrid, atrocious. The prisoners were literally buried alive, kept in a complete darkness in a single underground cell of five foot high and nine foot long where they could not stand up nor sit up; scorpions and other insects occupied the cells with the prisoners, with one small hole for air and another hole in the ground used as a lavatory. They only received enough food to make it until next day. The only time they were allowed to go out was to bury other prisoners.

END_OF_DOCUMENT_TOKEN_TO_BE_REPLACED

My name is Joanna and I currently live in London.

This blog is a tool for me to express my thoughts about books I have read, places I have visited and experiences I have lived through.

I hope you will get inspired a little bit!