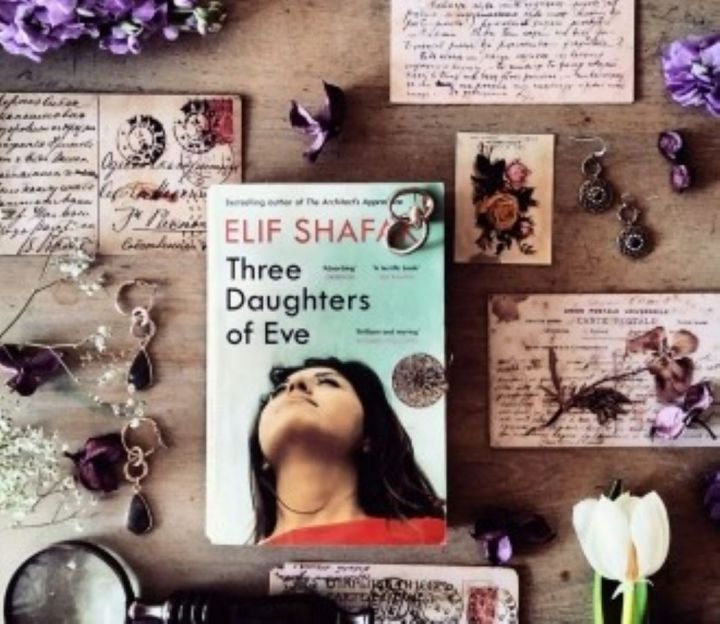 Three Daughters of Eve by Elif Shafak tackles many different topics including religion, or rather the meaning of God in one’s life, how cultural and political circumstances shape lives of the individuals and the position of women in Eastern and Western societies.

The story does provide an insight into Turkey’s turbulent past such as military coup in the 1980s and how life looked like during the rule of the military. There are descriptions of house search, torture, imprisonment of the individuals for holding different opinions to the ones accepted by the government and society. We also see what the years of torture, imprisonment and humiliation can do to the individual life.

All this is intertwined with the reflections on religious beliefs in the Muslim society. Elif Shafak as always shows a rather nuanced perspective and avoids stereotyping. It is a husband, a father who is secular and wants his daughter to get education and to be an independent woman. On the other hand, a wife, a mother is very religious, and thinks about her daughter’s future from the patriarchal perspective. The characters are never simplistic or shown in white and black shades. Each character outlined in the book is nuanced, with its good and bad traits

The portrayal of Peri’s parents offers a snapshot of a family life in its all complexity and ambiguity. The attitude of Peri’s father might appear the best for his daughter but he also was depicted as someone who had to fight his own demons such as alcoholism for most of his life. Then, Peri’s mum was very conservative in her views but she had to deal with so much in relation to her children who were either radicalised or were sentenced to years in prison, her alcoholic husband and her life as a woman in a very patriarchal society. Once can easily develop some sort of gentle fondness for Peri’s mother without feeling any affinity to her strict religious beliefs; it is worth remembering that religion can often bring solace and a certain type of comfort to people going through constant hardships.

We also observe how members of the same family might follow very different paths: one of extreme views on religion and national identity and another one of liberal values, secularism and idealism. This is reflected in Peri, the main protagonist of the book and her brothers who hold starkly different beliefs on life, religion and their homeland.

We witness the contemporary Istanbul and also the Western life, reflected in Peri’s life in Oxford where she experiences the life as an immigrant which challenges her identity. During her student years in England, she is exposed to conflicting views on God, religion and the meaning of life.

As a young woman while studying at Oxford University, Peri shares the house with two other young women: Shirin -`the Sinner’ who is non-religious British-Iranian whose views could often be considered anti-religious; and Mona ‘the Believer’, an Egyptian – American student who is a devoted Muslim proud of her cultural and religious heritage. Peri – ‘the Confused’ is the one who questions and doubts. She does not believe in any absolutisms and certainties – she is closer to what we can refer to as agnosticism.

Different opinions cause constant quarrelling between young women, similar to Peri’s parents who had very different views on religion. Despite all that we see people with opposing views developing close relationships such as friendship and even romantic relationships. Shafak shows us that finding similarities between each other rather than focusing on differences can lead to building a more stable and peaceful community.
.
Three Daughters of Eve offers a very interesting exploration of religion, women’s position in the society, cultural and national identity. 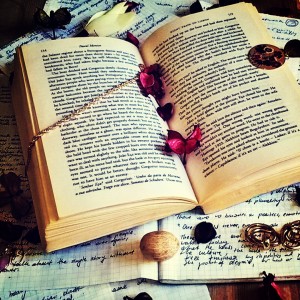 My name is Joanna and I currently live in London.

This blog is a tool for me to express my thoughts about books I have read, places I have visited and experiences I have lived through.

I hope you will get inspired a little bit!

I wish you all a lovely and peaceful weekend ahead 💜
🌟 Fresh Water For Flowers by Valérie Perrin 🌟
Internat [‘Boarding school’; also published in English under the title 'The Orphanage’] by the Ukrainian writer Serhiy Viktorovych Zhadan (Serhij Zadan)
💜 'There' s a moment at the end of every day, where the world falls away and you are left alone with your thoughts. A reckoning. (...)'.
A Bookshop in Algiers by the Algerian writer Kaouther Adimi is a literary feast. This book might be small in size, just under 150 pages, but it is dense with capitavating literally anecdotes related to both Algerian and French titans of literature as well as with many unique perspectives on the history and culture of Algeria throughout the 20th century. This book offers a moving portrayal of Algeria, its capital, Algiers and its inhabitants.
🌟North Korea Like Nowhere Else by Lindsey Miller🌟
𝐀 𝐌𝐨𝐧𝐭𝐡 𝐢𝐧 𝐒𝐢𝐞𝐧𝐚 𝐛𝐲 𝐭𝐡𝐞 𝐀𝐦𝐞𝐫𝐢𝐜𝐚𝐧-𝐋𝐢𝐛𝐲𝐚𝐧 𝐚𝐮𝐭𝐡𝐨𝐫, 𝐇𝐢𝐬𝐡𝐚𝐦 𝐌𝐚𝐭𝐚𝐫
𝐇𝐮𝐦𝐚𝐧𝐤𝐢𝐧𝐝: 𝐀 𝐇𝐨𝐩𝐞𝐟𝐮𝐥 𝐇𝐢𝐬𝐭𝐨𝐫𝐲 𝐛𝐲 𝐑𝐮𝐭𝐠𝐞𝐫 𝐁𝐫𝐞𝐠𝐦𝐚𝐧
𝐖𝐡𝐞𝐫𝐞𝐚𝐛𝐨𝐮𝐭𝐬 𝐰𝐚𝐬 𝐨𝐫𝐢𝐠𝐢𝐧𝐚𝐥𝐥𝐲 𝐰𝐫𝐢𝐭𝐭𝐞𝐧 𝐢𝐧 𝐈𝐭𝐚𝐥𝐢𝐚𝐧 𝐛𝐲 𝐭𝐡𝐞 𝐁𝐞𝐧𝐠𝐚𝐥𝐢-𝐀𝐦𝐞𝐫𝐢𝐜𝐚𝐧 𝐰𝐫𝐢𝐭𝐞𝐫, 𝐉𝐡𝐮𝐦𝐩𝐚 𝐋𝐚𝐡𝐢𝐫𝐢 𝐰𝐡𝐨 𝐚𝐥𝐬𝐨 𝐭𝐫𝐚𝐧𝐬𝐥𝐚𝐭𝐞𝐝 𝐭𝐡𝐞 𝐛𝐨𝐨𝐤 𝐡𝐞𝐫𝐬𝐞𝐥𝐟.
🌟 𝐇𝐮𝐦𝐚𝐧𝐤𝐢𝐧𝐝: 𝐀 𝐇𝐨𝐩𝐞𝐟𝐮𝐥 𝐇𝐢𝐬𝐭𝐨𝐫𝐲 𝐛𝐲 𝐑𝐮𝐭𝐠𝐞𝐫 𝐁𝐫𝐞𝐠𝐦𝐚𝐧 𝐑𝐞𝐚𝐝𝐚𝐥𝐨𝐧𝐠 🌟
I would like to share with you a lit bit about one of my favourite writers who is almost unknown these days to the anglophone audience. I hope that some of my French followers might have read some of the books by this remarkable author of a profound sensitivity.
Hot Stew by Fiona Mozley
𝐓𝐡𝐞 𝐏𝐡𝐨𝐭𝐨𝐠𝐫𝐚𝐩𝐡𝐞𝐫 𝐚𝐭 𝐒𝐢𝐱𝐭𝐞𝐞𝐧 𝐛𝐲 𝐆𝐞𝐨𝐫𝐠𝐞 𝐒𝐳𝐢𝐫𝐭𝐞𝐬
🌟 𝐇𝐨𝐭 𝐒𝐭𝐞𝐰 𝐑𝐞𝐚𝐝𝐚𝐥𝐨𝐧𝐠 🌟
𝑰𝒏 𝑶𝒕𝒉𝒆𝒓 𝑾𝒐𝒓𝒅𝒔 𝒃𝒚 𝑱𝒉𝒖𝒎𝒑𝒂 𝑳𝒂𝒉𝒊𝒓𝒊.
💜 The Distance by Ivan Vladislavic
𝐂𝐨𝐜𝐤𝐫𝐨𝐚𝐜𝐡𝐞𝐬 𝐛𝐲 𝐒𝐜𝐡𝐨𝐥𝐚𝐬𝐭𝐢𝐪𝐮𝐞 𝐌𝐮𝐤𝐚𝐬𝐨𝐧𝐠𝐚
'El Excluido' ('The Excluded') by the great Spanish writer, David San Jose Martinez @davsanjose